Over the May Bank Holiday we once again returned to Woldingham School, Caterham.  The grounds were once again in impeccable condition with full use of the indoor swimming pool, sports hall, and the best wide game country to be found over the course of the weekend.  This year we celebrated the Queen's 90th Birthday as well as the 400th Anniversary of William Shakespeare's death.

This was a great chance for some of the older boys to remind themselves of the customs of camping under canvas, and for the newer boys to learn the ropes (so to speak!) prior to Summer Camp.  The boys were exceptional, and all, including the HQ, had a fantastic weekend.  The camping competition was won by Pavlos' patrol, Romeo.  Well done to them on their success!


One of our Chaplains, Fr Peter Gallagher SJ, offered Mass for us on the Saturday evening and Tom Causton found a wonderfully peaceful and beautiful place for this to take place.   It was a truly special Mass. 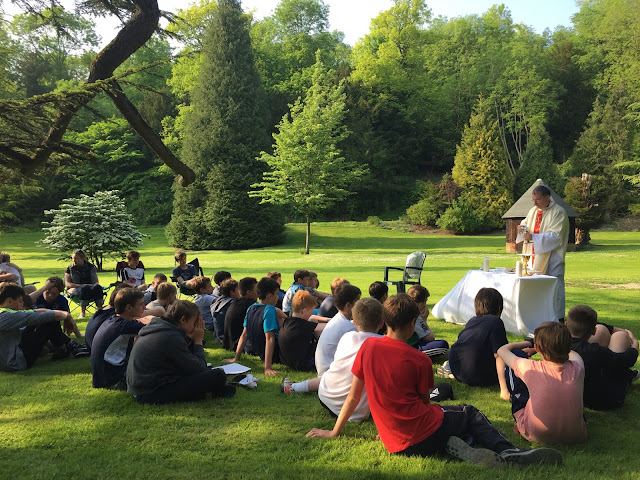 Posted by 9th Wimbledon Scout Troop at 21:17 No comments:

We are part of the Sacred Heart Parish and it supports us through the use of the Halls and our storage area.

For a number of years, Mike and now Francis have supported the Friendship Group with its annual outing, by providing the Scout Minibus as transport.

This year's outing on 10th May was to Grayshott Pottery which is just outside Hindhead. This year there were 24 people in total, so a couple of extra cars were needed as well.

We were treated to a tour of the pottery where some very individual designs are produced, as well as the larger production runs for some of the High Street restaurant chains, which many of you will have used. A very pleasant lunch was served in the cafe, which was enjoyed by all, while the shop appealed to many of the Friendship Group members.

The Scouts were thanked warmly for sharing the use of our minibus to make this outing possible.

Posted by 9th Wimbledon Scout Troop at 13:34 No comments:

In April 2016 another two of our Assistant Scout Leaders were formally presented with their Wood Badges.  This is an acknowledgement by the Scout Association of all of the training undertaken as part of the role, including First Aid Training, Safeguarding and how to run successful meetings just a few of the many criteria.  The Ninth has an excellent leadership team, with as many fully qualified leaders as the average Scout Troop has Scouts!

Congratulations to both on their achievements, and thanks for their continued commitment to the Group.

Posted by 9th Wimbledon Scout Troop at 21:15 No comments:

On the weekend of the 18th-20th March 2016 we held our annual Group camp at the excellent campsite Walton Firs.  Beavers, Cubs, Scouts and our Young Leaders all joined in with activities ranging from archery to caving and even building fires.

On the Saturday we held a Mass which Canon Clark, Parish Priest of the Sacred Heart Parish celebrated for us.  After the Mass we were pleased to be able to hand over a cheque as a donation to the Parish for allowing us to use their wonderful facilities.  The donation was made up of money raised on our Sponsored Walk last year. 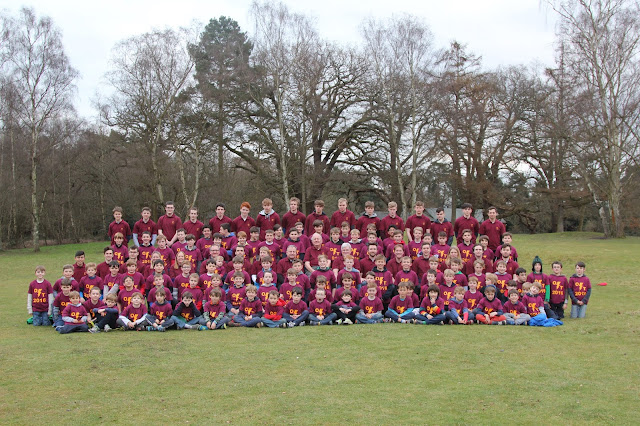 Posted by 9th Wimbledon Scout Troop at 15:46 No comments:

First Aid training is an important part of Scouting and something that all complete from the Beavers section upwards.  The District now has a resident First Aid Trainer, none other than our very own Nick Day! Nick attended a week-long course allowing him to train groups in a variety of first aid qualifications.  Both Young Leaders and Assistant Scout Leaders must hold up-to-date first aid qualifications, and Nick will now help to deliver the training necessary for this, as well as the training to other Groups in the District.  Well done Nick!

Posted by 9th Wimbledon Scout Troop at 10:02 No comments:

Our resident Beaver Leader, Angela Maher has recently undergone knee surgery meaning she will be unable to lead meetings for several months whilst she recovers.  Catriona Maher will continue to lead the weekly cubs meetings.  We are pleased to announce that one of our Assistant Scout Leaders, Brendan Corrigan, has kindly agreed to step us as Acting Beaver Leader for the remainder of this year.  Brendan has been an outstanding ASL in recent years, and will continue to have our support in his new role.

Posted by 9th Wimbledon Scout Troop at 18:25 No comments:

From YL to ASL in the blink of an eye

The Autumn Term saw two of our Young Leaders turn the ripe old age of 18! With this sudden change in their age Ciaran and Jack are now referred to as ‘Mr …’, and will begin their training to be Assistant Scout Leaders under the careful guidance of the excellent District Training Officer, Alison.
Posted by 9th Wimbledon Scout Troop at 20:00 No comments: